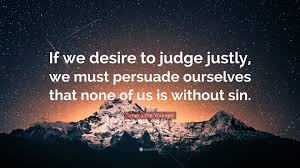 Normally in the Gospels the dramatis personae does not include Jesus’ family except for the occasional reference to his mother. But here in John 7 we are introduced to his brothers (7.3-5). Evidently they didn’t believe in Jesus as God’s Son, but still they accept his miracle-working ministry. So they tell Jesus to go up to Judea, so that his disciples could see his miracles – they evidently assume that he would not do miracles in Galilee, although he had turned water into wine and fed the 5,000 in Galilee. They rightly point out that no-one does things in secret and at the same time wants to live openly/boldly (7.4).
Being very aware that Judea and Jerusalem were to be the place of his death, Jesus immediately replies by saying that his time has not yet come. It’s fine for them to go to Jerusalem to celebrate the Feast of Tabernacles, for the world doesn’t hate them like it hates him. So he stayed for a while in Galilee before going to Jerusalem for Tabernacles. However, he didn’t go openly, but in secret (7.10).
Although he went to the Feast secretly, he then went to the Temple and began to teach there (7.14). People had been expecting him and were looking for him. Debate (the same Greek word that is used for ‘grumbling’ in 6.41, 43) raged with some affirming that he was a good man, while others accused him of deceiving the people (literally ‘crowd’). The whole atmosphere was threatening, so no-one dared speak openly/boldly about him (7.13) and despite their protestations of innocence Jesus asks them, “Why are you trying to kill me?” (7.19).
Why indeed! They may accuse him of breaking the God-given Law/Torah in healing a man on the Sabbath, but he points out that they break the Law by commonly circumcising babies on the Sabbath (7.21-24). So Jesus appeals to them not to judge on the basis of what they see, but to judge with a just judgment (7.24).
Matters arising
a) Jesus’ brothers.

Although the Gospels clearly teach that Mary was still virgin when she gave birth to Jesus, these verses (and perhaps also 2.12) would seem to show that she and Joseph had other children after Jesus. However, this causes severe problems for Roman Catholicism which has developed the somewhat strange doctrine of Mary’s perpetual virginity. In his Anchor Bible commentary the Roman Catholic Raymond Brown proffers various suggestions. Could these “brothers” have been from an unknown previous marriage of Joseph’s? Could the word “brothers” really mean some close relatives like cousins?  Or does “brothers” refer to the group of close disciples and should not be considered as distinct from “your disciples” in 7.3 and 2.12? With such questions Brown and other Roman Catholic commentaries are careful not to contravene their traditional dogma, but I personally cannot accept this special pleading and prefer to accept the more obvious sense that after the birth of Jesus Mary and Joseph married and had a normal sexual relationship which produced younger brothers to Jesus.
b) Boldly

From the very outset of his Christian faith the Apostle Paul was known for the boldness of his preaching (e.g. Acts 9.29; 13.46; 14.3; 18.26; 19.8) and it was his longing in prayer that the Lord would help him to “speak boldly” (Ephesians 6.20). For him every aspect of his Christian life and ministry needed to be characterised by this boldness. Now in John 7 the same word (Greek Parrhesia) is used by Jesus’ brothers, “No-one does anything in secret and seeks to live in boldness” (7.4). Also in 7.13 “no-one spoke boldly about him for fear of the Jews”.
There is no real parallel in English for the Greek word ‘boldness’. It infers such a confidence and assurance of something that one acts or speaks about it with courage. So in 7.4 it assumes that people who do things secretly don’t have absolute confidence and therefore dare not be open. And in 7.13 people’s fear out-weighed their faith; they did not have such assured confidence about Jesus that they could confess their faith in him openly and courageously. Unfortunately we have to confess that many British and other European Christians also lack such an assured faith in Jesus that moves them to witness openly and boldly.
c) The Jews 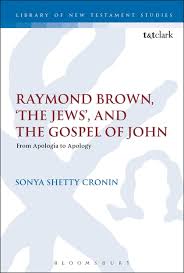 Hitler partly supported his hatred of Jews and developed the consequent Holocaust on the basis of Martin Luther whose writings betray an appalling anti-semitism. Critics of the Bible tend to go one step further back and blame John’s Gospel for its references to “the Jews” as the enemies of Jesus and the burgeoning Christian faith. In John’s Gospel it stands out clearly that “the Jews” are indeed the primary enemies of Jesus who caused his suffering and death. We have then to ask who John meant when he talked of “the Jews”.
In facing that question we remind ourselves that John himself was of course a Jew. Did he therefore hate his own people? It would seem unlikely. And for John it was not the Jews who caused his exile to the remote island of Patmos. If John had been afflicted with racist attitudes, he would surely have hated the imperialistic Romans who did in fact crucify Jesus and who also unjustly exiled him to Patmos. So it seems deeply improbable that John’s use of “the Jews” reflects any anti-semitism.
So what did John mean by the term “the Jews”? In 7.1 “the Jews” follows immediately after the name “Judea”. In the Greek both have the same root and relate very closely indeed. It is therefore possible that in John’s Gospel “the Jews” really means ‘the Judeans’ as distinct from the Galileans. And we know that it was in Judea that Jesus faced particular opposition, enmity and finally death on the cross. On the other hand, some of Jesus’ closest friends were Judeans (e.g. Martha, Mary and Lazarus)’.
In my blogs I have generally accepted the common understanding of “the Jews” as referring to the leaders of Israel, who not only led the people of Israel but also represented them. Opposition to Jesus generally began with the Pharisees and Sadducees. And it was at their hands that he was given over to the Romans for crucifixion. The Jewish and Judean crowds are represented in the Gospels as swithering in uncertainty between faith and dislike. Some times the crowds welcome him with cries of ‘Hosanna’ and some times they form a mob and cry out for his crucifixion. But, with an occasional exception like Nicodemus or Joseph of Arimathea, the leaders were implacable in their hatred and opposition of Jesus.
d) Justly 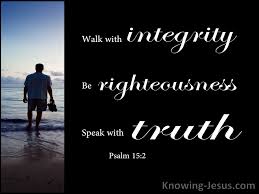 In 7.18 Jesus points out that those who speak ‘on their own’ without inspiration or authority from another are seeking their own glory. But the one who seeks the glory of whoever sent them, that person is true (we may note once again John’s emphasis on truth and being true) and non-justice is not in them. Righteousness and truth form such key ingredients of life!
The Lord God is entirely just and righteous in all his judgments, acts and words. As followers of Jesus we too are called to put away anything in thought, word or deed which is not entirely just and righteous. In this matter let us not seek our own glory, but the glory of Jesus who sends us out into the world with the life and message of his salvation!
Categories: Uncategorized | Leave a comment

Posted on September 3, 2018 by richardsh 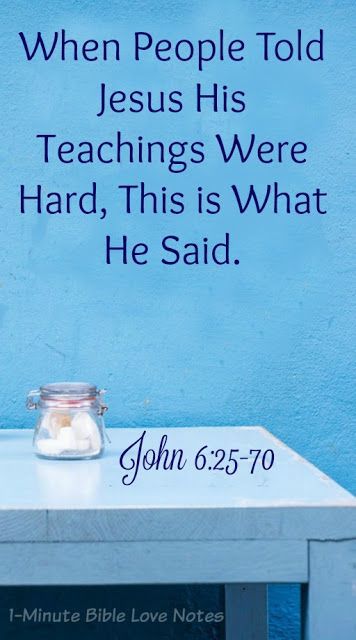 As a consequence of his miracles and particularly the super-abundant meal of bread and fish he had just given the crowds, Jesus was attracting a good number of disciples. But after the feeding of the 5,000 his teaching scandalized them. How could he claim that he “came down from heaven” (6.59) and promise eternal life to those who ‘eat my flesh and drink my blood’ (6.54)?

If they are offended  by his claim to have come down from heaven, Jesus says, what will they think when they “see the Son of Man ascend to where he was before” (6.61)? The supreme glory of Jesus’ ascension will surely confound them.
And why are they so shocked at the apparently crude demand that people eat his flesh and drink his blood? Such physical things are just “flesh” which “counts for nothing” (6.62). They needed to go through and beyond these outward matters to concentrate on the Spirit who “gives life”.
Although it had seemed that Jesus’ teaching was so hard, Jesus proceeds to declare that “the words I have spoken to you are Spirit and they are life” (6.63). “The words” (plural) are a composite whole and are equivalent to the word “teaching”, so the verb “are” is actually in the singular. Jesus’ words give life, even eternal life (6.63, 68). God’s word was the means of creation in Genesis 1 and it is by word that God reveals himself through the prophets and in the Scriptures. God’s word therefore creates and reveals.The supreme divine word is of course Jesus himself as the ultimate Word of God. As believers in Jesus we believe in God’s word written and in God’s Word incarnate. He creates new life, eternal life in all who will follow him in faith. He also reveals the Father and makes him known (1.18). Without the revealing and life-giving word in Jesus, God our Father remains a distant unknowable and irrelevant power on high.
The many (6.60-66)

Back in the desert wanderings after the Exodus from Egypt, Israel had been guilty of grumbling. Now Jesus’ claim to be the bread from heaven caused grumbling among the crowds of his disciples (6.41, 43). And in 6.61 Jesus shows that he is aware of their grumbling and speaks into that situation. Grumbling and complaint don’t only characterise our current ‘Blame Society’, but in this negativity we follow in the footsteps of Old Testament Israel and the crowds who were attracted to Jesus by his miracles. Jesus knew that some of his apparent followers didn’t actually believe and that one of them would even betray him (6.64).
The Twelve (6.67-71) 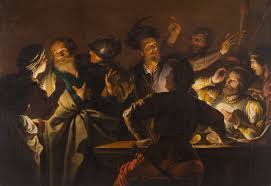 Would even Jesus’ intimately close little in-group of the twelve disciples also want to desert him? Jesus had spent a whole night in prayer before carefully choosing these particular men to be his special disciples (Luke 6.12-14). He would depend on them not only for friendship and support during his time on earth, but also for carrying on his life-giving saving work after his ascension back to the Father. Jesus loved the Twelve quite particularly. We therefore specially notice  the emphasis on “the Twelve” in these verses (6.67-71). Indeed in the Greek the final words in 6.71 tragically stress that Judas Iscariot, the one who would betray him, was “one of the twelve”. 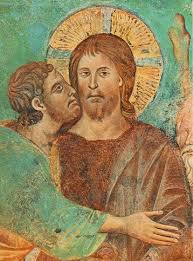 Some years ago the then Principal of All Nations Christian College prophetically declared to the whole college in a worship time, “One of you will deny Jesus”. We were all shocked and searched our souls. We asked ourselves whether it lay in our hearts to betray Jesus and deny our Christian faith. We realised our fearful weakness and absolute dependence on the Father’s enabling grace and power (6.65). And we reminded ourselves of Peter’s response, “Lord, to whom shall we go? You have the words of eternal life” (6.68). Nothing, nobody else can rival the life-giving grace of Jesus. He stands unique in his love and glory.

Editor’s note: Please continue to pray for Elizabeth Goldsmith, who is having to take things very quietly at the moment until she can renew the medication she is taking – Martin and Elizabeth greatly appreciate your prayers!